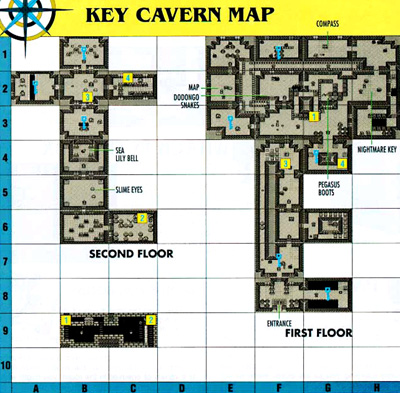 When you first enter the dungeon in room 8F, the door above you will slam shut. Now as you may find this somewhat rude, the monsters in this game are certainly not known for their social skills. To open the door, throw a pot at it. In the next room (7F) defeat all of the enemies to gain a small key from the chest that appears. Head up the right opening at the top and go all the way up to room 4F. Descend the stairs that are there. In the room below you have a choice of four doors.

Enter the top door. Defeat both enemies and the get the small key. Strike the crystal switch and then return to room 2B and go up the stairs. Open the chest next to the stairs to get 50 rupees and then head down to room 6F. Here go to the right. In room 6G open the chest to get 200 rupees. Now head back to room 2B and then go right to 2C. In room 2B there are two other doors. The bottom door will give you two bombs and the left door will give you a floating heart, but I would not recommend going in them until you have the Pegasus Boots. Once in room 2C go up the stairs on the bottom of the room. In the next room (4G) destroy all the blocks and then claim the small key that appears. Now head up to 3G, on up to 2H, and finally up to 1H.

Defeat the snakes and then go to the right to room 2G. Go around to the right side, push the lower block in and the top one up, and then claim the Pegasus Boots from the chest. Use the Pegasus Boots to destroy the strange objects at the bottom of the screen. Now return to room 2F and warp back to the entrance (8F). At the entrance head right to room 8G. As soon as the circle in the floor is not repelling you, charge at it with the Pegasus Boots and your sword to destroy it. Then claim a small key from the chest. Now return to 8F. If you wish you can now head up to 5F on the left side of the divider and destroy the blob; then go around and destroy the two enemies on the right side to obtain the Fragment of a Stone Slab. Either way, go to 8F and warp to 2F. Now head over and up to room 2H. Plant a bomb in the center of the bottom wall (where the floor tiles point to). In the room below (3H) use the Pegasus Boots and Roc’s Feather to jump the big pit and then head up. Jump the next pit and then claim the Nightmare’s key from the chest.

Now return to room 3F. Open the locked block with a small key and work your way all around the circle and then head down the stairs. This leads to the side-scrolling sequence of 9B–9C. In 9B, ram into the block with the Pegasus Boots to make the block drop. In 9C use the Pegasus Boots and Roc’s Feather to leap the gap. You will now reappear in 6C. In room 6C, kill all of the enemies and the door will open. In the next room (6B) kill all of the enemies and pick up the small key. Now open the door at the top and prepare to face Slime Eyes (see strategy below).

Once Slime Eyes is gone, head up to 4B and claim the Sea Lily’s Bell. You have now finished Level 3!

(item needed: Bombs)
To defeat these two creatures, throw bombs in such a way that the creatures eat them. The bombs will explode inside them and hurt them. Three hits each will destroy them.

(items needed: Pegasus Boots, sword)
When you first enter his room, you will need to ram into the wall to make him drop from the ceiling. Run up and hit him rapidly with your sword. When he almost appears to split, ram him with the Pegasus Boots. After you ram into him, he will split into two eyes. Now select one eye and concentrate on it. As soon as you hit one, it will fly into the ceiling and try to land on you. Watch its shadow and avoid it when it lands. After three hits, the first eye will die, and then repeat this on the second eye.